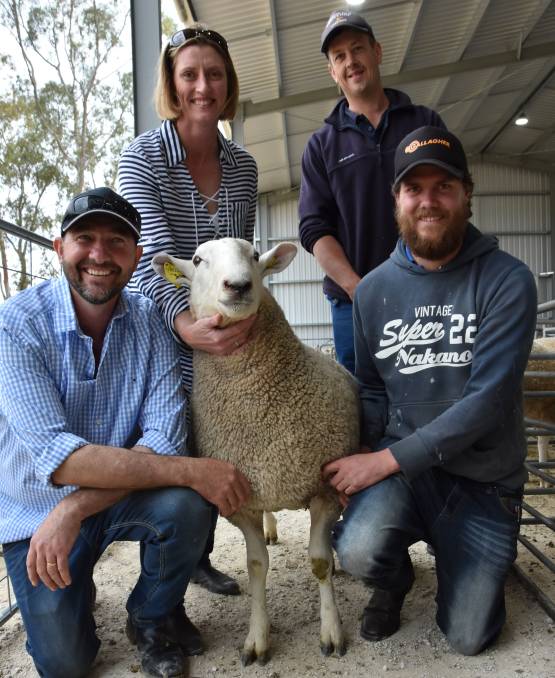 In a remarkable effort, stud principals Martin and Kirsty Harvey, sold 180 of 185 July and August 2016 drop rams for a $1522 average, at their first annual sale.
The main sale featured 144 lots and another 33 were catalogued for the mini auction but with the sustained strength of the sale there was a last minute decision to run the whole catalogue through the ring.
The Harveys bought the Wongary stud in 2009 from Robert and Diana Hooper at Wrattonbully and have built a strong, loyal clientele for their paddock reared ,maternal sires.
After selling privately for years they decided to hold an auction to give each of these buyers an equal chance to secure the rams of their choice.

Lot 1- a twin born, July 2016 drop –  ram sired by Glencorrie 140457 achieved a new $7000 stud record, knocked down to the Simons family, Pembroke stud, Telangatuk East, Vic.
Buyer Ashley Simons, was impressed with the ‘well shaped” ram with excellent hindquarters and balance of Lambplan figures, including a positive fat figure of 0.4 and positive eye muscle of 0.1.
The opening high price set the scene for the stellar sale, which saw a packed gallery from the Mid North, the Mallee and throughout the South East.

Many specialist first cross ewe producers who are vendors at the Naracoorte blue ribbon sales were among those with volume orders.
They went head to head, regularly surpassing $2000 for their pick rams.
McPiggery, Lameroo, bought the $2700 second highest priced ram, at Lot 5 – one of seven rams they bought for a $2300 average.
It was also sired by a Glencorrie ram with a yearling weight of 8.4.
Susie Pocock, Pocock Pastoral, Lameroo and Pocock Pastoral’s Western Flat property manager Angus Munro dominated the top end buying with 13 rams in the first 50 lots for a $2069 average.