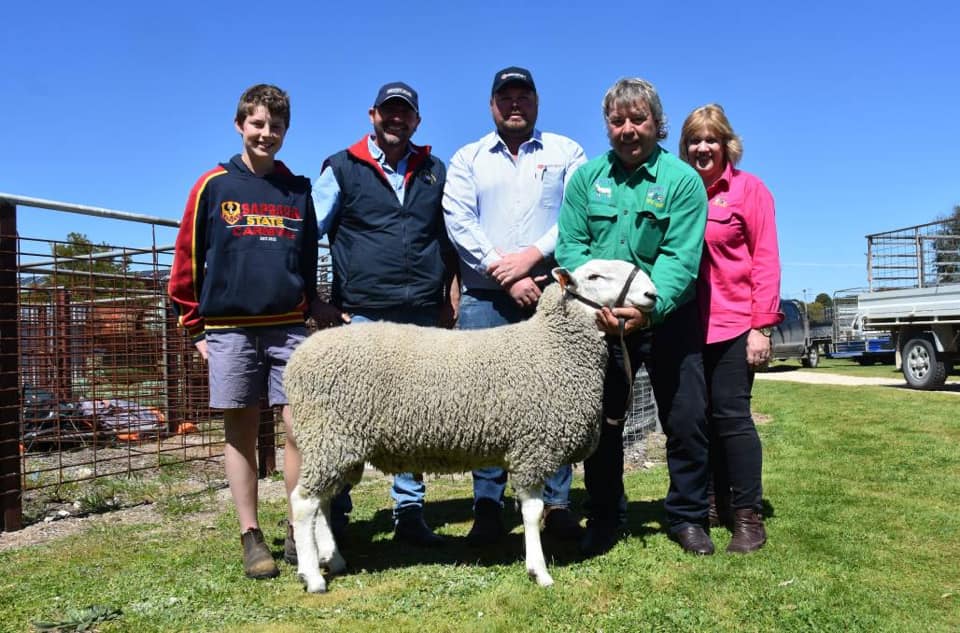 THE big crowd at Johnos Border Leicester stud’s 21st annual sale at the Naracoorte Showgrounds on Monday witnessed something special with the star lot making $15,000.

The twin-born ram- Johnos 202/18 – offered by Jeff and Raelene Johnson from Eurack, Vic, was sired by one of the breed’s highest indexing rams, Johnos 83/11.

It was knocked down to rapturous applause, smashing the stud’s previous highest price of $10,000 and coming close to the national record of $18,200.

The successful buyers were Martin and Kirsty Harvey, Paxton stud, Western Flat, who were impressed with the good feet and structure of the ram, as well as its figures including a Border Leicester cross index of 139.9- in the top 10 per cent in the Sheep Genetics database.

It also had a number of lambs weaned figure of 21pc.

“We bought a ram from Johnos a number of years ago and it bred exceptionally well so we were very happy to support the guys again,” Mr Harvey said.

“If he breeds as well as himself he will have a significant impact for us.”

Mr Harvey said after strong ram sales in 2018 including $9500 and $8500 at the Horsham Border Leicester Show & Sale last November they were keen to reinvest in a top sire.

Paxton stud was pushed all the way by Michael and Julie Osborne, Ryeview stud, Millicent, who later bought another Johnos 83/11 son for $3400.

In a sign of the high quality of the offering six of the rams were knocked down to studs.