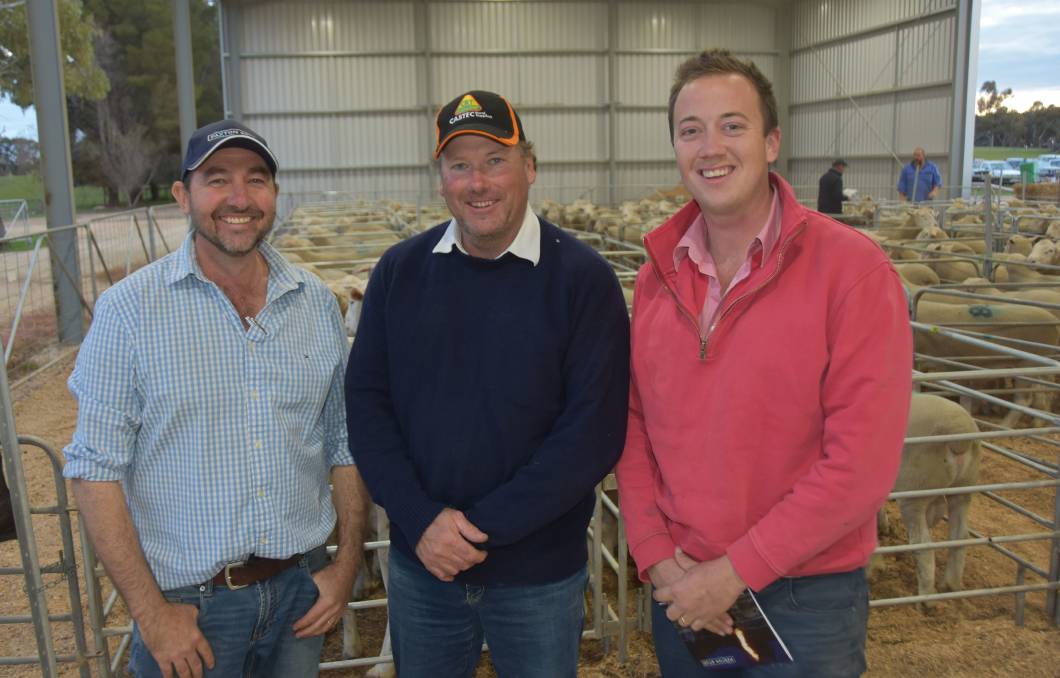 PAXTON stud’s second twilight on-property sale was a barnstorming success with a near total clearance of nearly 200 impressive British breed rams and significant lift in average across both its White Suffolk and Poll Dorset offering. Although the sale at Western Flat on Wednesday last week did not reach any dizzy heights pen after pen of the rams offered by Martin and Kirsty Harvey sold well.

Many of the 38 registered bidders came with similar budgets, leading to plenty of rapid fire bidding. About 90 per cent of them were repeat clients who have been buying since well before the stud transitioned to selling at auction in 2018.

The three $2400 sale toppers which displayed plenty of length and carcase were all from the first 12 lots of the Poll Dorset offering.

PR Gould & Co, Lucindale, outlasted fierce competition to buy all three of them, two sired by Allendale 16082 and the other by Wrattenbullie 16042.

A top price of $2100 was achieved three times for White Suffolks, two of these going to Pocock Pastoral, Western Flat, who bought 10 rams for an $1890 average.

The other $2100 ram was knocked down to Nigel Watson, Lucindale, who has been buying from the stud for more than 20 years. He was one of two buyers to dominate the sale putting together 35 rams for a $1560 average. These rams will be put over the Watsons’ first cross ewes aiming to produce 22kg carcaseweight lambs.

In the Poll Dorsets it was Martin Flower, buying for Duxton Broadacre Farming, Frances, who led the buying with 29 rams to $2200 twice for a $1317 average.

LS Johnson & Son, Naracoorte, bought seven Poll Dorsets to $2000, averaging $1557. Pinkerton Palm Hamlyn & Steen director Robin Steen said the rams presented in “magnificent” order. “They are as good as he (Martin Harvey) has had them and they sold accordingly with an excellent average of both breeds,” he said. Mr Steen said the “lamb job” was very good which was giving people reasonable confidence to invest. “We are very fortunate we have got an area were we have got some feed and the ability to finish lambs,” he said.

Mr Harvey said the family was “over the moon” with the result and thanked their clients and PPH&S for their wonderful support. “We are so pleased with the support we continue to get from the people who have bought our rams for a long time,” he said. He said they had paid strong attention to structural soundness of the rams, as well as high growth and muscling. “We have tried to keep our numbers to 100 rams and keep the quality up and I think it showed being able to sell them all for good money.”

Mr Harvey said the five to 10 year outlook for the lamb industry was” unbelievably exciting”. “Good luck to the good operators who are getting rewarded, we are seeing these people paying for good genetics and good breeding,” he said. ‘The market is very strong because the numbers of breeding sheep are not there and it it going to take years and some decent rain to change that.”

Paxton’s second on-property sale for the season will be held on Friday, October 11, with 170 Border Leicester rams on offer.